Mildred is the loving mother of many children—foster, adoptive and birth. Sean and I met her about eight years ago when she taught a few of our “PRIDE” foster parent training sessions. “Go out into the world and make a difference,” she said at one class, a quote I jotted down that’s been stuck to our fridge ever since.

A couple of Mondays ago, Mildred’s 23-year-old adopted son was shot and killed while walking down a street on Chicago’s west side. Here are two paragraphs in The Chicago Tribune about his murder. Meanwhile, a friend of ours who’s been in touch with Mildred says she feels “empty,” and 21 more people have been killed in Chicago, 19 of them men.

Providing treatment for people who need it

Saturday night I attended a fancy party at the Lincoln Park Zoo raising money to benefit people in need of behavioral health treatment; you can read more about the event in The Daily Herald. The lions came out as dusk set in. Wimoweh. Or a-weema-weh? 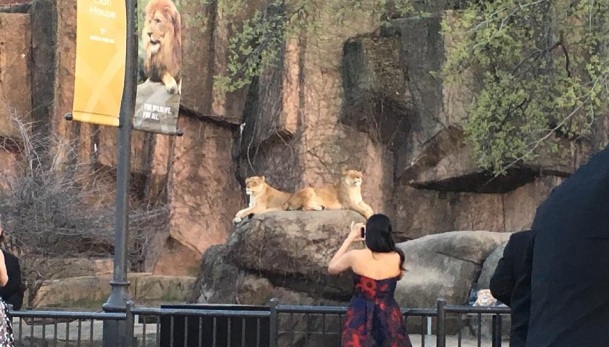 I helped create the video for the event, which shares the stories of two families impacted by autism spectrum disorders and the difference that services they’ve received have made in their lives. A non-verbal toddler is now a thriving child, looking forward to kindergarten. A young woman who’d been hurt can trust and laugh and dance again. In fact, I experienced the ineffable joy of dancing with her to the band’s covers of The Jackson Five, Whitney Houston and Bruno Mars, before concluding the night with a hot coffee and midnight carousel ride.

What I’m still learning about Napoleon

Earlier this year, a friend and I went to see Ani DiFranco at the Park West.

It had been years since I’d listened to Ani, and I didn’t want to go, in all honesty. It was winter and cold, and I’m prone to hibernation. I went, though, thank goodness, and Ani, her music, my kiddos and Napoleon, of all people, inspired an essay I’m proud to have published Friday in The Washington Post. If you’re able to spend a few minutes reading, great and thanks. Please share your thoughts! Also, any ideas on how to handle a 5-year-old and 3-year-old who now can’t stop/won’t stop singing “Everyone is a [expletive] Napoleon” …?

One thought on ““Go out into the world and make a difference.””

Creative storytelling strategies to engage your audiences and advance your goals

Davida Williams' thoughts about the joys & challenges of fostering & adoption

The latest news on WordPress.com and the WordPress community.